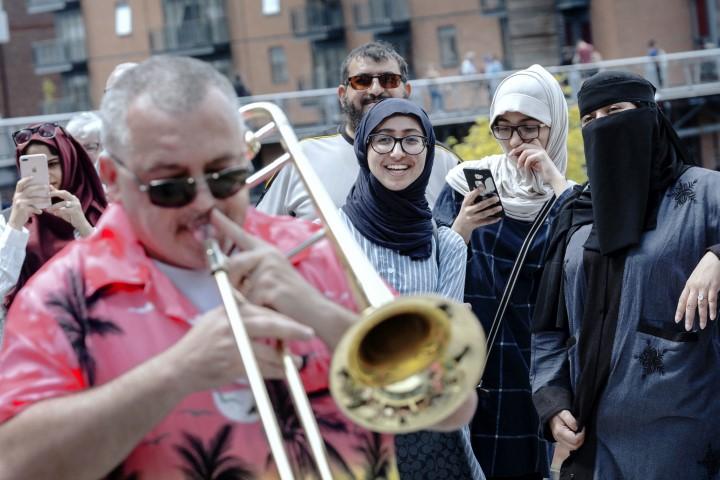 The one-month countdown has begun to the start of Birmingham’s biggest and longest running jazz festival, with many performances taking place here on Westside.

And come wind, rain or sunshine – and whatever the latest data says for the final lifting of COVID-19 restrictions – organisers have pledged that the show will go on.

The 37th Birmingham, Sandwell and Westside Jazz Festival will run from Friday 16 to Sunday 1 August, with around 130 performances, and all but seven of them offering free admission.

Festival director Jim Simpson explained that the final programme was still to be released, partly due to the changing dates for the government’s roadmap out of lockdown.

Mr Simpson said: “You will have heard the announcement that the so-called ‘freedom day’ has been postponed from 21 June to 19 July, cutting into the first three days of our festival which was scheduled to run from 16 to 25 July.

“From our discussions with the musicians, venues, sponsors, supporters and suppliers, this is our new plan.

“Some venues want to stay with the original schedule, others want to postpone by a few days, but nobody has yet said that they want to cancel, and everybody seems to be committed to present a great festival to celebrate our unbroken run of 37 years.”

The event, first held in 1985, went ahead last year, despite the coronavirus pandemic, although it took place in a reduced form during October.

Mr Simpson is expecting this year’s festival to be back to something approaching what was normally expected.

He said: “As well as jazz, blues, swing, dixieland and more, there will also be free ukulele, jitterbug, vocal and instrumental workshops open to all comers of any age and ability.

“It is bound to be a wild few weeks in the jazz festival office, talking to venues, booking musicians, recruiting volunteers, ordering programmes, posters and T-shirts to get everything ready.”

Mr Simpson added that all venues, bars, restaurants, shopping centres and markets hosting the festival would all strictly adhere to whatever social distancing and other safety measures required.

The festival, which has received £75,433 from the government’s Cultural Recovery Fund, has generated more than an estimated £80 million for the region’s economy since its 1985 debut, putting on a total of 6,755 performances and attracting more than 2.9 million people.

Mike Olley, general manager of Westside BID, said: “We thrilled that the city’s biggest and longest running jazz festival is once again partly taking place here in our district, and we can’t wait to see audiences tapping their feet to some great music.”

This year’s festival will precede the much smaller inaugural Jazz Fest organised by Birmingham’s Town Hall and Symphony Hall, in partnership with radio station Jazz FM.

That event takes place from Monday 23 to Saturday 28 August on the Symphony Hall stage, in the venue’s brand-new Jennifer Blackwell Performance Space, and at The Spotted Dog in Digbeth.

▪ The latest details on the 37th Birmingham, Sandwell and Westside Jazz Festival will appear in the next few days at http://www.birminghamjazzfestival.com/