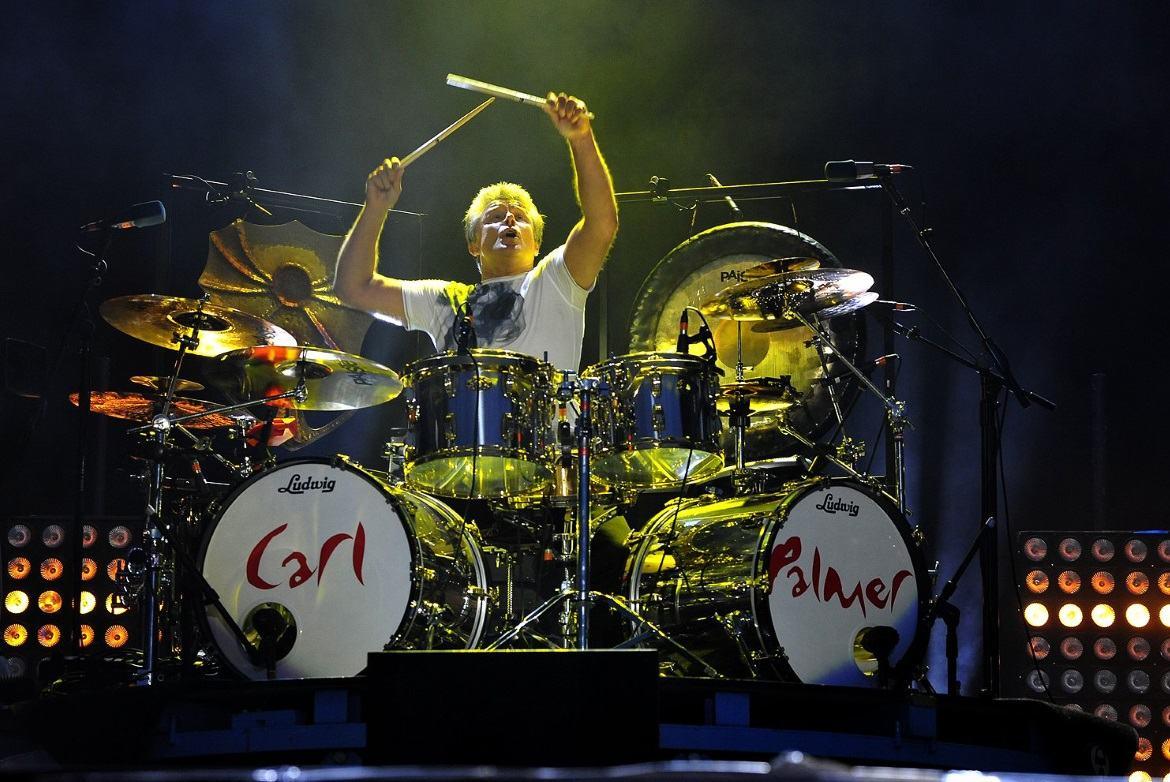 Renowned rock drummer Carl Palmer is a veteran of many bands including Crazy World of Arthur Brown, Atomic Rooster, ELP (Emerson, Lake & Palmer) and Asia. Born and brought up in Handsworth Wood, he’s back at the city’s Symphony Hall on 11 April to receive a star on the city’s ‘Walk of Stars’. Here he reflects on his early memories …

I feel very fortunate to have been growing up in Birmingham in the 1960s, writes Carl Palmer, a time when the city’s music scene was comparable to Liverpool’s.

It was a tremendously exciting and creative time and it’s not surprising that many internationally successful musicians and bands came out of Birmingham during that period. The city gave me the foundation to a great career in music, something I will always be grateful for.

My favourite time in Birmingham was around 1963-64 when I joined my first rock and roll band, the King Bees. I was only 13 or 14 and still at school, whereas the other three members of the band were students at university in Birmingham. We played on the famous Regan circuit. The Regan’s made a huge difference to the music scene in Birmingham as they had so many bands playing in their venues. I played at the Handsworth Plaza that was just around the corner from where I lived. And I knew that’s what I wanted to be: a drummer in a rock and roll band. My parents wanted me to have a secure position playing in the CBSO, but I had other ideas!

As a teenager it was an exciting time with so many talented musicians in Birmingham such as Steve Winwood, Spencer Davis, Jeff Lynn, Robert Plant, The Moody Blues and so many more. I used to go to the Chapel Tavern where they would hold jam sessions on a Saturday morning. It was a great meeting place for Birmingham’s up and coming musicians, and on one occasion I played alongside the young Steve Winwood.

My strongest childhood memories of Handsworth Wood were of how quiet and peaceful it was, even though it was very close to Birmingham city centre. We lived in Silvercroft Avenue, just off Oxhill Road and we looked onto allotments and open countryside. There was a farm called Hill Top that we used to go up to on our bikes, climbing trees and paddling in the brook. It was a great environment to grow up in and I remember many happy times. My cousin Warwick used to come over from Hockley and we would talk about music, as both our families were musical, and he would play guitar and I’d play the drums.

Yardley’s was a well-known music shop in the centre of Birmingham and I remember when I was 11 years old sitting on the top deck of the bus going into town to see this amazing red-glittered Olympic drum kit and I thought it was fabulous. When I got home I told my parents that this was what I wanted for Christmas. It wasn’t mentioned again, but on Christmas morning 1961 I came downstairs and noticed there was nothing laid out on my chair in the living room apart from a box of chocolates and some comics in my Christmas sack.

My mother asked me to fetch her dressing gown from her bedroom. As I opened the door to her bedroom there, in the middle of the room staring at me, was a red-glittered drum set. I couldn’t believe it! I was so happy I rolled around on the floor and kissed the bass drum. I was ecstatic.

About a month after Christmas my dad suggested going to the Odeon cinema in the Soho Road to see a film called Drum Crazy.  By then I was definitely interested in drums and seemed to have a natural ability,but had no idea where it would take me. The film was based on the life story of Gene Krupa, one of the first drummers to bring drums to the front of the stage. Drum Crazy made a huge impression on me. As we left the cinema I told my father in no uncertain terms I wanted to be a drummer, and nothing else would do.

I began playing professionally from the age of eleven, mostly over the weekend. My dad would take me to all the local venues where I played regularly and on a Saturday night I would play at two different venues in Birmingham and Wolverhampton.  After many hours of working I was ravenous and when we got back home my dad and I would demolish a whole cooked chicken that my mother had put in the oven for us. It was fantastic!

I remember playing at the Aston Variety Club in Trinity Road with a pianist called Lill Cross when I was about 12 years old. I played all types of music styles and it gave me a lot of experience.

I went to Greystone Primary School in Handsworth Wood and then onto Handsworth Boys, a secondary modern school. I spent a lot of time playing truant from secondary school so I could go home and practice playing the drums. I used to be a milk monitor so I could get an extra bottle of milk, and when I had finished delivering the milk I would nip over the fence and walk home to practice the drums. I did get chased by the school attendance officer once who saw me in Grove Lane Park, but I was too fast for him.

School did unfortunately take second place to playing the drums as most of my time was taken up having drum lessons with Tommy Cunliffe, the best drum teacher in Birmingham, as well as practicing and playing.

I left school at 15 in 1965 to go to London to audition with Chris Farlowe and the Thunderbirds. He’d seen me play with the King Bees at one of the ‘all nighters’ at Birmingham Town Hall so when the King Bees didn’t achieve anything with the single we released I called Chris and he asked me to audition for his band in London.

Although I left Birmingham in 1965, there has always been a strong connection and some of my family still live in Sutton Coldfield and Bournville. My partner, Katie, also comes from Sutton Coldfield. I often visit and have seen the wonderful way Birmingham has developed as a city and continues to do so.

The careers of Palmer and John Lodge, of The Moody Blues, will be celebrated at Symphony Hall on 11 April during a Night of Stars event hosted by Jasper Carrott, in collaboration with Westside BID. Tickets are priced at £28 or just £15 for the back tiers, with proceeds going to the Birmingham Children’s Hospital Charities and Westside Charitable Endeavours, dedicated to recording the area’s historical attributes. Book tickets here: https://www.thsh.co.uk/event/birminghams-night-of-stars-in-aid-of-birmingham-childrens-hospital