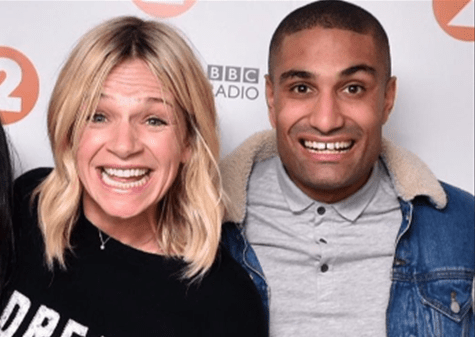 The Broad Street Walk of Stars on Westside was brought to the attention of millions of listeners for three-and-a-half minutes on prime-time BBC Radio 2 today.

Gerald Manton, chairman of Westside BID, and one of individuals who helps decide which famous celebrities are featured on the Walk of Stars, was interviewed in Birmingham’s Centenary Square by Richie Anderson on Zoe Ball’s Breakfast show.

In his tongue-in-cheek interview, Richie asked if he – as a famous Brummie now on national radio – could be awarded with a coveted star.

Gerald explained that there were three crucial requirements for star recipients: a strong connection with Birmingham, a national presence and international significance. Although Richie qualified for the first two, he struggled for the international element.

However, Gerald promised Richie a star – but only if he could persuade every country currently taking part in the Commonwealth Games to start playing the ‘brush chucker challenge’.

He also said that Richie would have to ensure that this strange game – which basically involves throwing a loo brush – was then featured as an official competition in the next Commonwealth games. Richie accepted the challenge! Listen to the interview here: