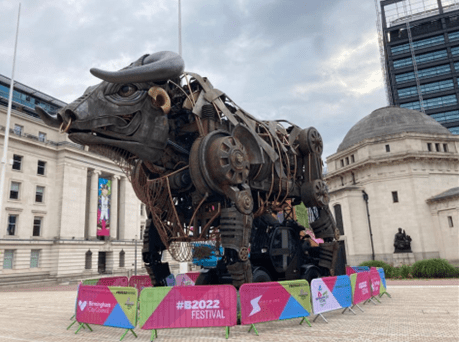 The giant, raging bull that starred in the opening ceremony of Birmingham’s Commonwealth Games 2022 has been transported to Westside to show off to the public.

The 10-metre high beast, which wowed more than 30,000 spectators in the Alexander Stadium in Perry Barr last night, along with up to one billion on TV worldwide, is now sitting in Centenary Square.

What was an angry, raging beast was led out by performers in the role of female chain-makers during the show to represent the industrial revolution, roaring loudly with flashes of smoke and fire.

But it was a more peaceful scene this morning as the massive structure sat with its mechanical parts gently moving in the square in between the Hall of Memory and the Library of Birmingham.

Mike Olley, general manager of Westside BID, said: “How brilliant that the giant, raging bull that impressed the world last night is now here on Westside.

“There are not many places where such a huge mehanical structure could sit safely, and so we are delighted to welcome bully to his new temporary home.

“It’s a thrilling invention to see here in Centenary Square and will attract even more people to the best place in Birmingham for entertainment, leisure and culture.”

Watch our video of the giant bull in Centenary Square here: