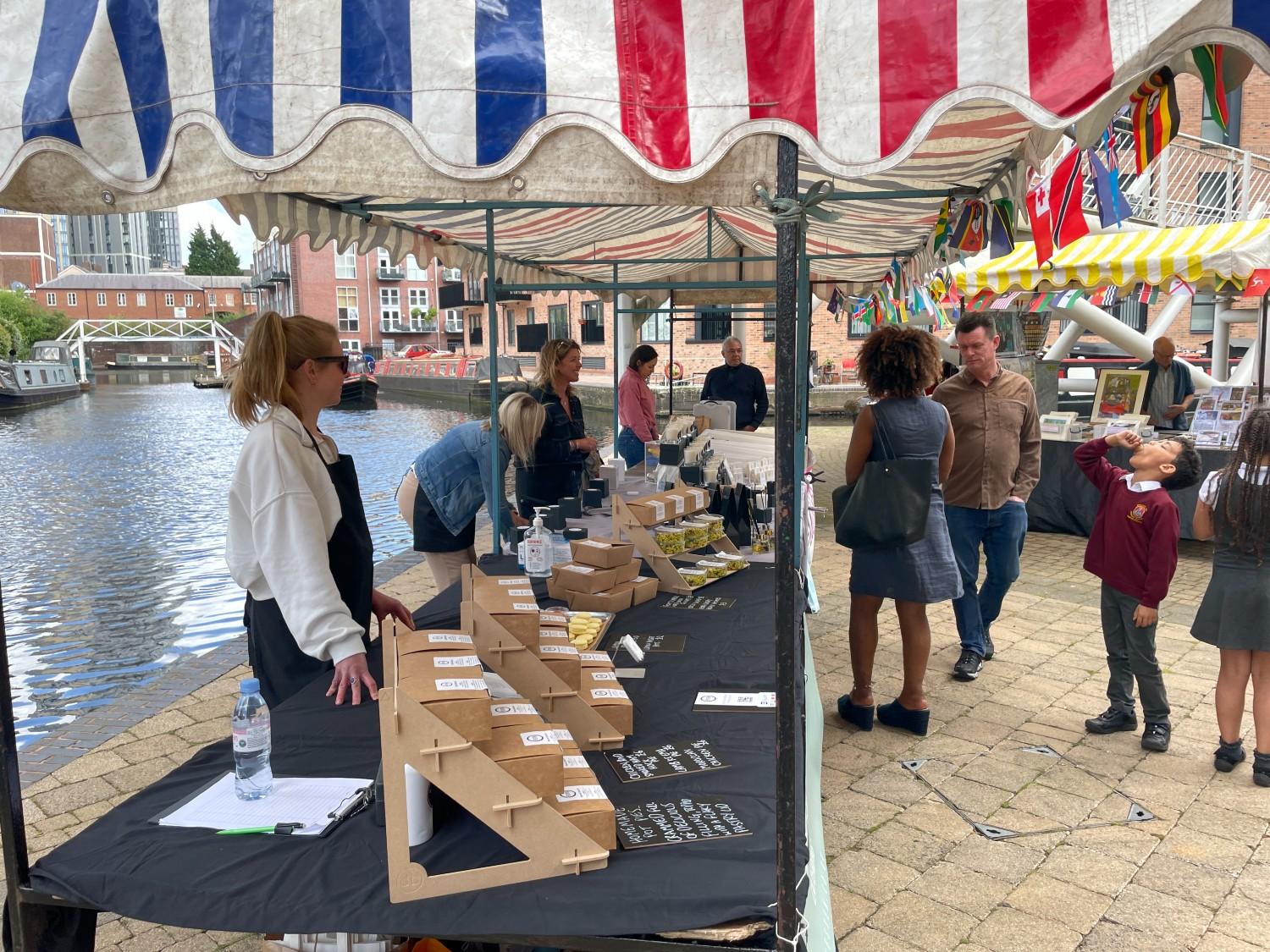 Hundreds of visitors enjoyed shopping, eating, drinking and relaxing in the summer sunshine as Westside’s Canal Square hosted the first in a series of new markets.

The Artisan Market, held outside JuJu’s Bistro on Friday 10 June, was launched with the support of a £10,000 grant from the Commonwealth Games’ Celebrating Communities scheme.

The event featured 22 stalls selling everything from craft jewellery and art to ice cream, samosas and locally produced spicy sauces and attracted more than 300 visitors.

Music provided by an accordion player added to the continental atmosphere, and ITV Central News broadcast live from the market on their early evening bulletin.

Watch our video of the new Artisan Market here:

Gerald Manton, chair of Westside BID, who is keen on Westside holding a range of markets across the district, said: “We’re absolutely delighted that the first Artisan Market has been such a success.

“We hope that these and similar events we’re working on in the future, including night markets, will become much-loved regular fixtures in the Westside calendar.”

The Artisan Market was organised by the Convention Quarter Residents’ Alliance (CQRA), an association of residents and businesses based around the NIA, ICC and neighbouring canals.

CQRA Chair Alex Elder said: “There’s all sorts of food and drink available on the market and some really fantastic local crafts and arts. We were terrified at first that we wouldn’t get enough stalls but we were oversubscribed, then we were worried we weren’t going to get enough customers, but we needn’t have feared.

“We’re very pleased with the way it went. The bakery and food people had completely sold out by the end and local residents told us they thought it was absolutely great.”

Local councillors Kath Hartley and Sir Albert Bore, who initially suggested tying the markets in with the Commonwealth Games and applying for grant aid, added that they were thrilled by the success of the first event.

Cllr Bore said: “This market has been a great first effort and this the first of what we hope will be many more markets. It livens up the square and by bringing people into the area we hope they will come back again and support the businesses based here.”

Cllr Hartley added: “I think the market’s great. We felt it was high time that Ladywood ward had its own market. We have them in Harborne, Moseley and Edgbaston and it’s a great thing to have one here. We’ve had plenty or residents and their families visiting, and the atmosphere is fantastic, and I’m really looking forward to the next one, which will take place during the Commonwealth Games.”

For more information about the markets visit https://cqra.org.uk/