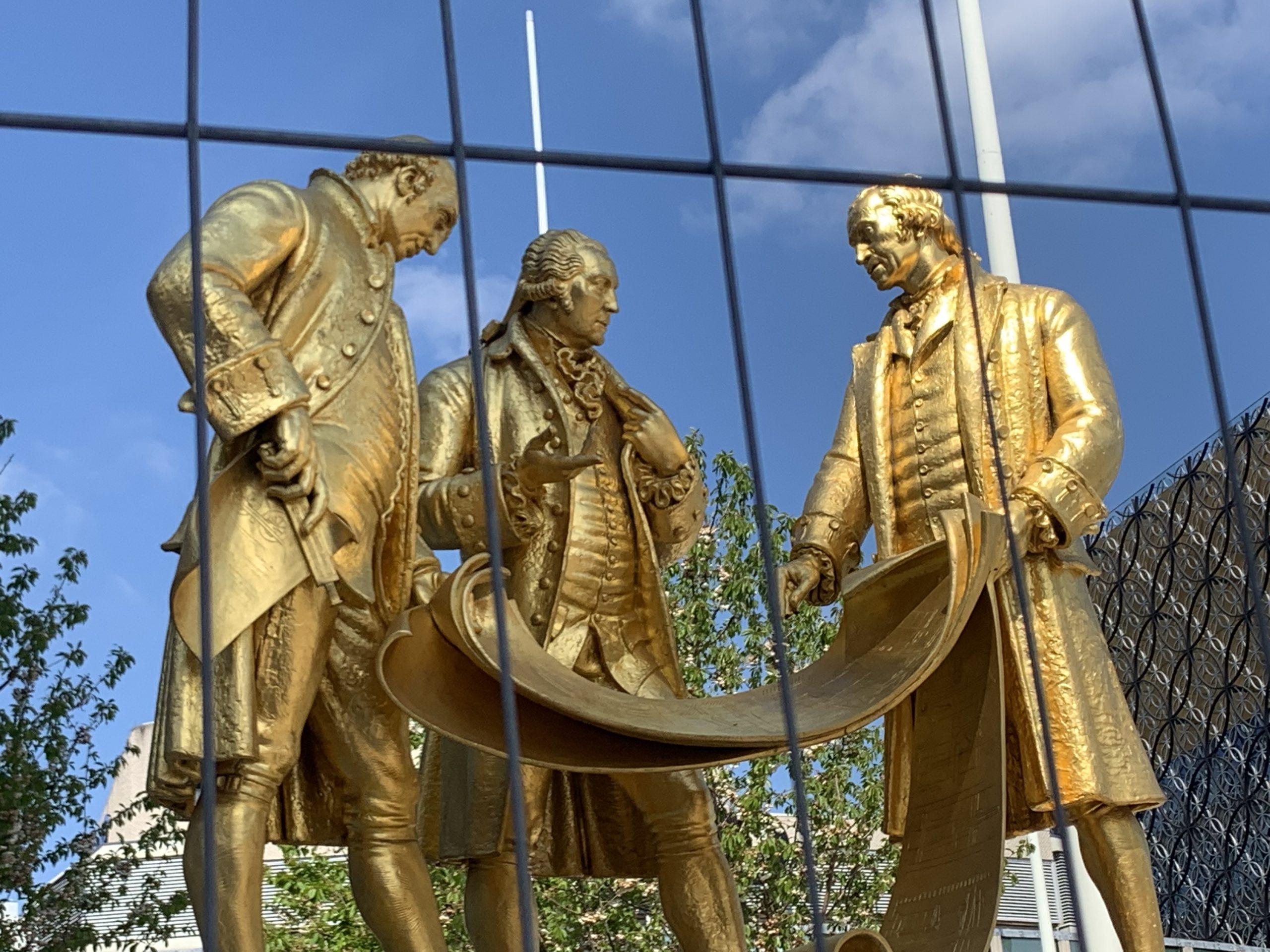 The landmark Boulton, Watt and Murdoch sculpture is back on Broad Street after a five-year absence initially caused by the Metro tram extension.

Nicknamed ‘The Golden Boys’ because of its striking bronze gilding, the sculpture was removed from outside the House of Sport, formerly the Register Office, in August 2017 to allow for Metro extension works.

But after further delays due to the revamping of Centenary Square, and then Covid-19 lockdowns over the past two years, the statue today made a dramatic comeback when it was lowered into its new permanent home outside Symphony Hall.

The moment of arrival was captured on Twitter by Westside visitor @ReissOmari:

The sculpture will remain cordoned off to the public for the time being before a possible official new ‘unveiling’ in the next few weeks.

Mike Olley, general manager of Westside BID, said: “It’s great to have our old pals Boulton, Watt and Murdoch back in town, and what superb timing for the summer and Commonweath Games.

“Along with our own Black Sabbath bench, the old statue is just one more reason for visitors to enjoy the Westside area.”

The reinstalled statue, which depicts famous Birmingham figures James Watt, William Murdoch and Matthew Boulton, will be accompanied by a plaque explaining its links to slavery following the recent Black Lives Matter protests.

This is understood to relate to Watt’s family having benefited from the profits of the slave trade.

Not only is the statue returning to Broad Street after almost five years, but it is now being sited just feet from its originally intended location. It was meant to stand outside a Planetarium, which was never built but which would have stood outside what is now the Repertory Theatre.

The statue, which was unveiled in its then ‘temporary’ home in 1956, is the work of William Bloye, formerly head of sculpture at Birmingham School of Art, and sculptor Raymond Forbes-Kings.

The larger-than-life size figures are in bronze, with a gold finish, on a stone pedestal and are shown discussing engine plans.

The three men are credited with pioneered the industrial revolution in late 18th century England.

James Watt’s improvements to the steam engine and William Murdoch’s invention of gas lighting made them famous throughout the world. Entrepreneur and industrialist Matthew Boulton then harnessed their talents in a company making everything from copper coinage to steam engines.

All three men are buried in St Mary’s Church Handsworth, known as the ‘Westminster Abbey of the Industrial Revolution’.