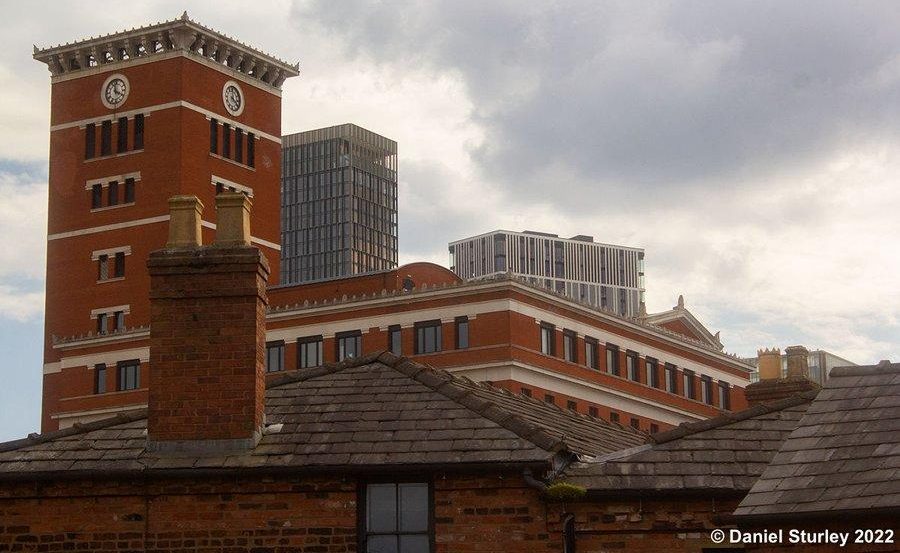 The fast-changing face of Westside is continuing to be recorded by one of Birmingham’s skilled amateur photographers who regularly focuses on the city’s architecture.

Daniel Sturley’s latest selection of pictures comes as various multi-storey developments have transformed the landscape of Broad Street and Brindleyplace with a mixture of old and new.

By skilfully planning his positions, Daniel posted the unusual shots on social media last weekend, and some of them add a distinct continental feel to the Westside area.

One example is the main image used for this story which blends aging roofs, red-brick and modern skyscrapers in its view of Three Brindleyplace, The Mercian and Bank Tower Two taken from Cambridge Street.

Another is the angles and architecture used in this face-up view of The Mercian, Bank Tower Two and a simple streetlamp on Broad Street.

The Mercian, formerly known as 2one2 Broad Street, towers over neighbouring developments at an impressive 42-storeys. Once finished, the £183 million project will boast 481 luxury rented apartments.

Meanwhile, the Bank Towers One and Two are at the opposite side of Broad Street’s junction with Sheepcote Street from The Mercian building, providing around 400 residential apartments.

Another tongue-in-cheek image shows the Scalextric-style Broad Street now that the Metro extension track has been laid.

Westside BID first featured Daniel’s photography back in January, and his latest shots have again impressed the BID’s managers.

Mike Olley, general manager of Westside BID, said: “Daniel’s latest shots are really superb. We’re so lucky to have a great bunch of amateur photographers recording the changing face of our district.”

Daniel, aged 53, works for Autism West Midlands as a digital media producer. He moved to Birmingham from London 26 years ago and has been living around the back of Brindleyplace for about 13 years.

He told us: “I love this city and have seen all these buildings go up, and to see it develop over the years has been amazing. My special interest is photography, particularly buildings such as new developments and their construction.”

The pictures in this article are all © Daniel Sturley and have been used here with his permission. You can see more of Daniel’s work via his handle on Twitter @ikonic_exposure and at yourplaceyourspace.net.

Our original story about Daniel’s work can be read here: https://westsidebid.co.uk/2022/01/18/the-changing-face-of-westsides-skyline-captured-on-camera/

Westside regularly highlights various photographers’ work across the district, many of whom won the chance to be featured in its 2022 calendar. Stories about the photographers that have been featured to date can be read at the following links:

Watch out for May’s winner who we will be featuring next week.