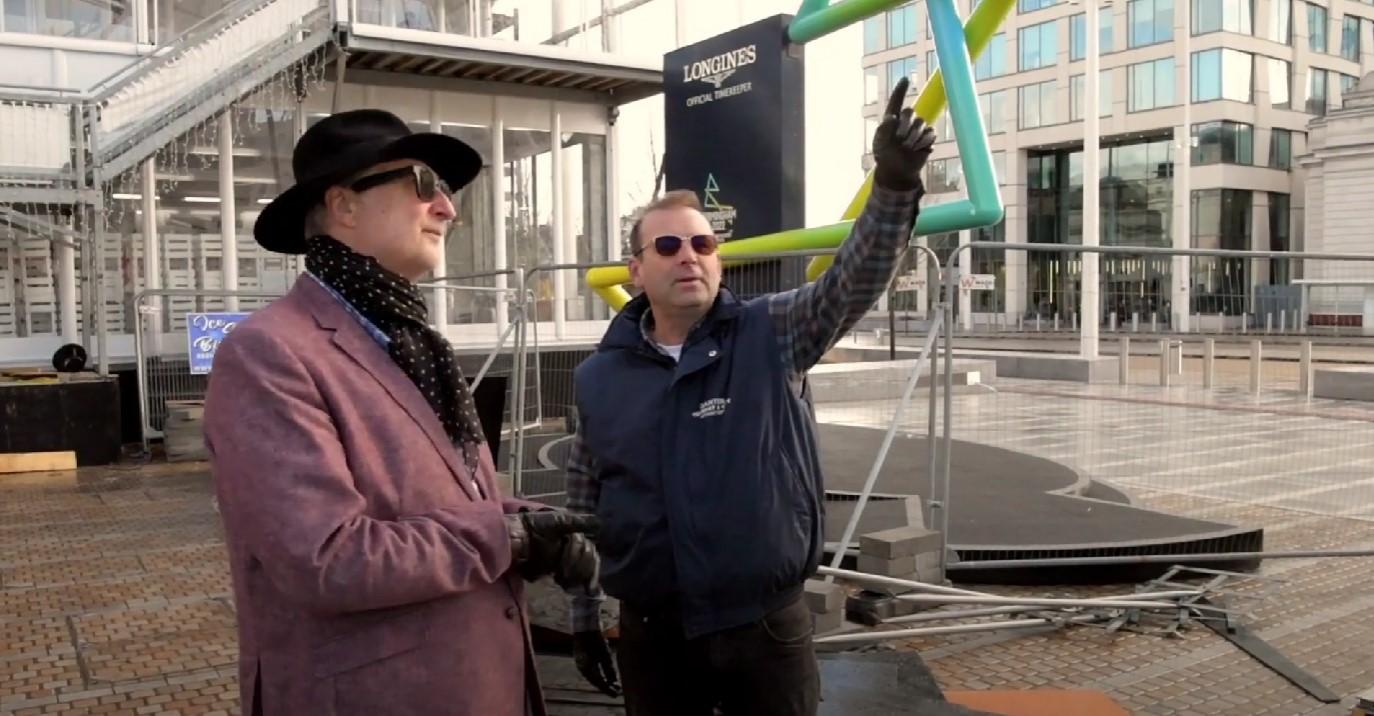 The big wheel reaches 40 metres high, while The Flyer can spin at 14 revolutions a minute, and the ice rink has skates ready for everyone up to size 15. Westside business leader MIKE OLLEY takes an awe-inspiring tour of the Christmas attraction with operator Abie Danter.

It’s become as Birmingham an institution as the Villa or the Blues. The big wheel and ice rink, back after a short break in the majestic and delightful Centenary Square.

We have missed you. This addition to the Frankfurt Christmas market is the exciting, must-visit bit of your journey to Birmingham.

I met up with Abie Danter, the operator who along with his team are responsible for the wheel and rink. Indeed, it’s more than just the wheel and rink. As you will see there is a flyer (an evil thing that) and a bar – how wonderful. May I say we couldn’t really film in the bar as it was in the final moments of finishing off, but it looks sensational. Don’t trust me: go have a drink there.

Emily, who is Abie’s wife and business partner, is also a key driving force behind this, but was unfortunately resting with a severe bout of flu the day I visited. We wish you well, Emily, it’s just not the same without you.

Yet as Emily and all can see, Abie gave me a good tour of the site before it opened. It’s going to be with us until 9 January 2022 so, literally, get your skates on and go have a blast, a whirl and a drink with great views.

What first impressed me was just how much infrastructure was involved once you’re close up. As I say, it’s not just a wheel and a rink. There is also a flyer, a contraction you simply won’t find me on. It would cause deep hurt if I was to ride that machine. Hurt to my ego that is, as I’m sure I would scream out like a stuck pig.

It’s 60 metres high and just how thick are those chains that hold the 24 little red seats that spin at 14 revolutions a minute? Well, Abie tells me that’s the maximum which he personally has tested it at, but generally they spin it a lot slower. Still, I wouldn’t even sit in one let alone let it move at 14 revolutions an hour, or at all.

The wheel, incidentally, has seating for 180 and towers 40 metres high, offering fabulous views of the square and Broad Street.

But there is a bar, a great bar, with a top end coffee machine. That’s more like the place I will be. And not just any old bar, it’s a first-floor bar, with great views. Views, in fact, that you will only ever see whilst this is here.

Strangely, for someone who runs an entertainment district, I stopped drinking some years ago. Yet this bar is just my cup of latte, and I heartily recommend it.

There are over 30,000 lights in total on site, all running on low energy bulbs, so this is going to brighten up your life while not costing the planet. Incidentally, that’s Ben Mansell who’s putting up the lion’s share of the lights and he seems very happy in his work. Nice one, Ben!

The ice rink is 25 square metres and the ice in 150 millimetres thick (that’s six inches) and it takes 10 days to get the ice ready. Basically, they just keep on spraying water onto ice which itself freezes. Simple, but time consuming.

No boots for ice skating? Don’t worry, the entry fee includes a pair. They have 752 pairs in all, from a toddler’s to a giant’s size, size 15. Plus all the boots have ankle supports which help you stay upright.

I’ve witnessed the Danters (Abie and Emily) growing year on year. They are great people to have around, great show people who know how to make our Christmas really special. Cheers guys, and a happy Christmas to you!