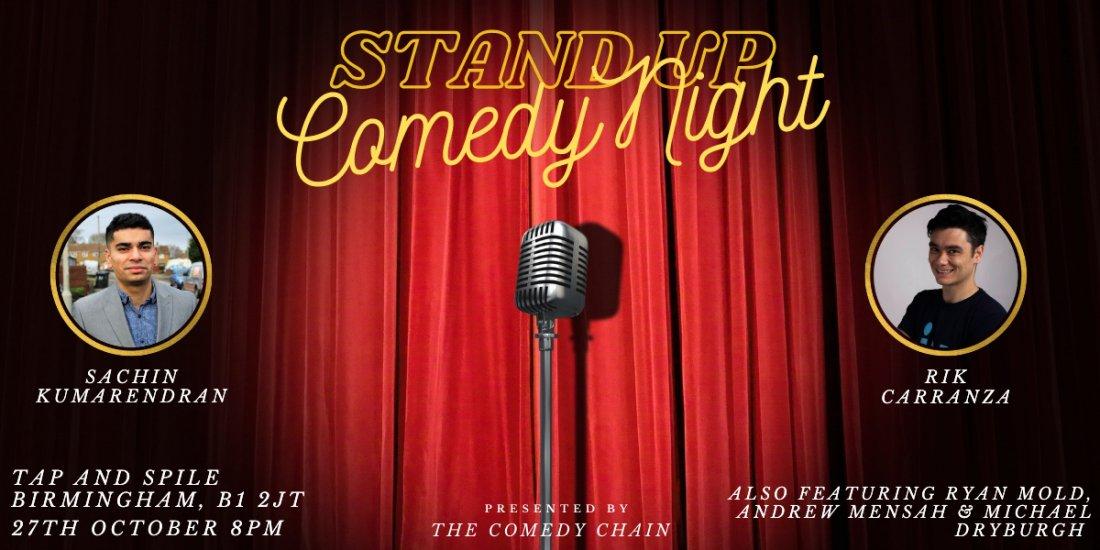 A new regular comedy night featuring some of the UK’s top comedians is launching later this month on Westside.

Rik Carranza and Sachin Kumarendran will star in The Comedy Chain’s first stand-up show at the Tap and Spile on Gas Street from 8pm on Wednesday 27 October.

Tickets to watch the hilarious pair start at just £2 in a show that will see them joined by comedians Ryan Mold, Andrew Mensah and Michael Dryburgh.

Luisa Huggins, media manager at Westside BID, said: “It’s great that comedy shows on Westside are coming back, as we all need to have a good laugh.

“We’re really impressed that The Comedy Chain has booked such renowned comics and we look forward to welcoming them to Westside.”

Rik Carranza has previously starred at the Top Secret Comedy Club in London, and up in Scotland at The Kings Head Regal Theatre in Bathgate and at the Laughing Horse during the Edinburgh & Adelaide Fringe.

Reviewers have told how he went down a storm, with Broadway Baby saying: “Entertaining and clever but also not afraid to go out on a limb or try to shock the audience.”

And Arts Award said: “’With a style similar to Stephen Lynch and a stage presence comparable to Russell Howard Rik is somebody you should definitely check out.”

Meanwhile, Sachin Kumarendran has performed hour-long shows for the Standup.tv platform and worked as a paid comedy writer for the Labour Party during the 2017 General Election campaign.

Billed as “an impressive and must-see comic”, he also performs shows for corporate audiences including Vodafone UK.

Oliver Weisfeld, head of promotion at The Comedy Chain, said: “This is a night you do not want to miss.

“It will feature an exciting, hilarious and highly enjoyable comedy evening where talented comics from around the UK come and perform for a private audience telling jokes that the outside world may never hear.

“We’re starting our regular monthly comedy nights after the recent pandemic to give the local community in Birmingham a chance to have a laugh.

“We can all agree that after what’s gone on with Covid, and now the petrol crisis, all of us need a chance to relax and have a fun time.

“High class comedians from around England are travelling far to perform at these monthly nights in the Tap and Spile, a pub considered a hidden gem.” Book tickets at: www.allevents.in/birmingham/stand-up-comedy-night-tap-and-spile-birmingham/80002662178862