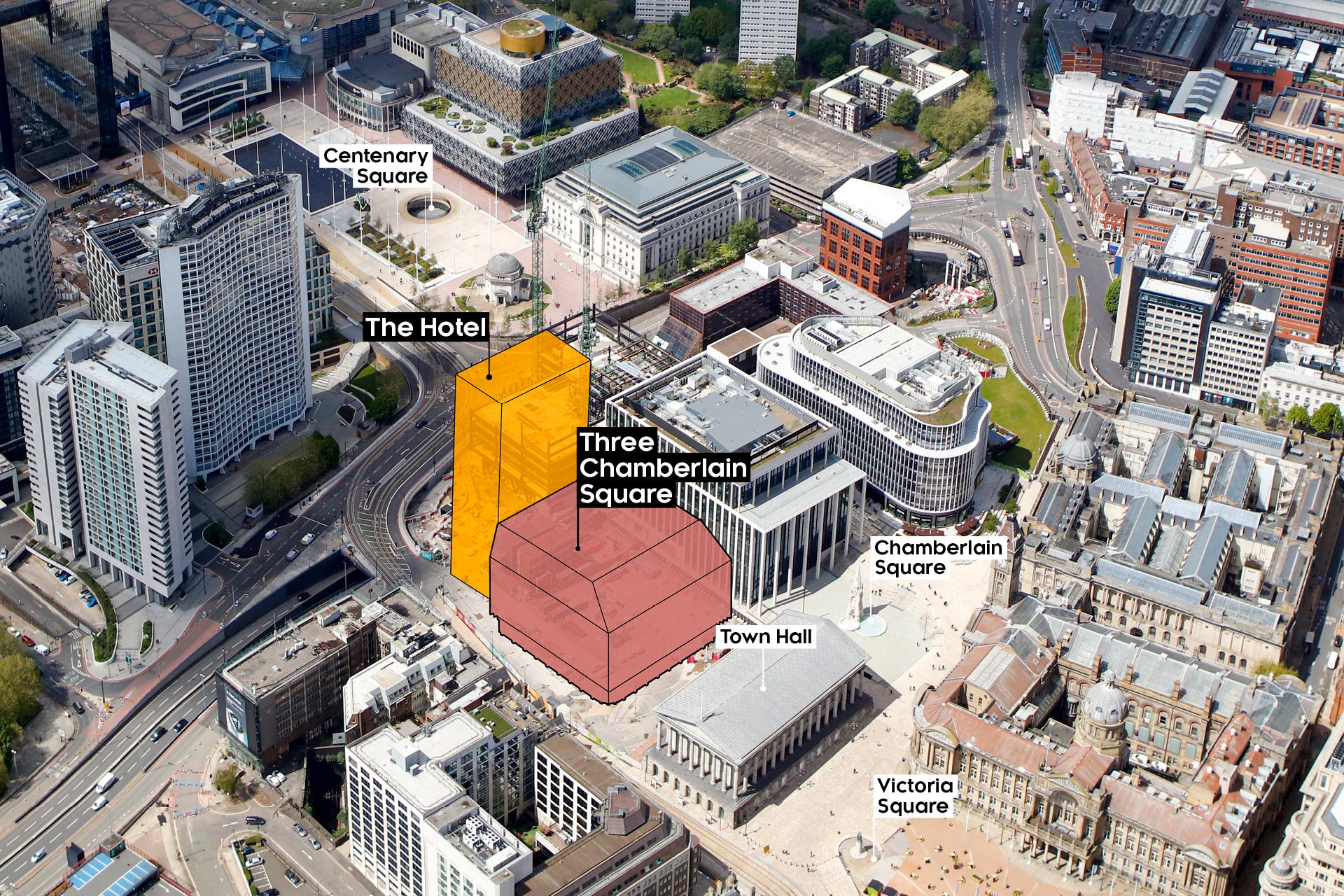 Public consultation is taking place into a major Birmingham development that will provide a vital new gateway into the Broad Street entertainment zone.

Plans to complete Phase Two of Paradise Birmingham are being showcased as part of the major consultation exercise before formal submission of detailed planning applications to Birmingham City Council this summer.

And as part of the public consultation, which continues until July 30, an online discussion will take place tonight with the architects’ and development team, from 6pm to 7pm.

There will also be new public spaces around the buildings, including Ratcliff Square and Western Terrace.

The new 17-storey hotel, designed through a collaboration between hotel specialists ISA Architecture & Design and Paradise master planners Glenn Howells Architects, will provide 152 bedrooms, a ground floor food and beverage offering, plus a sky bar with panoramic views across the city.

Three Chamberlain Square will be a ten-storey office building comprising 180,000 sq ft of space. It has been designed by award-winning Feilden Clegg Bradley Studios (FCBStudios).

In April this year Birmingham City Council also awarded planning permission for the 49-storey Octagon residential building at the northern edge of Paradise that will provide 370 high quality new apartments.

Rob Groves, regional development director with Paradise development manager MEPC, said: “Our plans for completing Phase Two of Paradise will create jobs, opportunities and promote skills for the people of Birmingham as well as helping Paradise realise its potential as a game changer for the city.

“Our ambition at Paradise has always been to create a truly mixed use development and in our proposals for completing the second phase we are bringing together plans for hotel and leisure use, exemplary commercial space and a large amount of new public spaces.

“Moving ahead with a number of new buildings right now is a massive vote of confidence in Birmingham and the regional economy’s recovery from the Covid pandemic.

“Our consultation exercise is another opportunity to listen and learn from the public and show as many people as we can our plans.”

“It will be a landmark, distinctive and modern building rooted in its heritage setting alongside the Town Hall, while offering commercial space with excellent wellbeing and environmental credentials.”

And Ian Springford of hotel experts ISA Architecture & Design said: “The centre of Birmingham requires more high quality hotel rooms and this proposal will help meet that demand while providing the city with another contemporary venue with dramatic views from the top floor sky bar.”

At almost 2 million square feet, Paradise is delivering up to ten new flagship buildings, offering offices, shops, bars, cafés, restaurants and hotel across 17 acres in the heart of the city.

The plans for Phase Two can be viewed at www.paradisebirmingham.co.uk/phase-two/ with opportunities for people to give feedback and record comments.