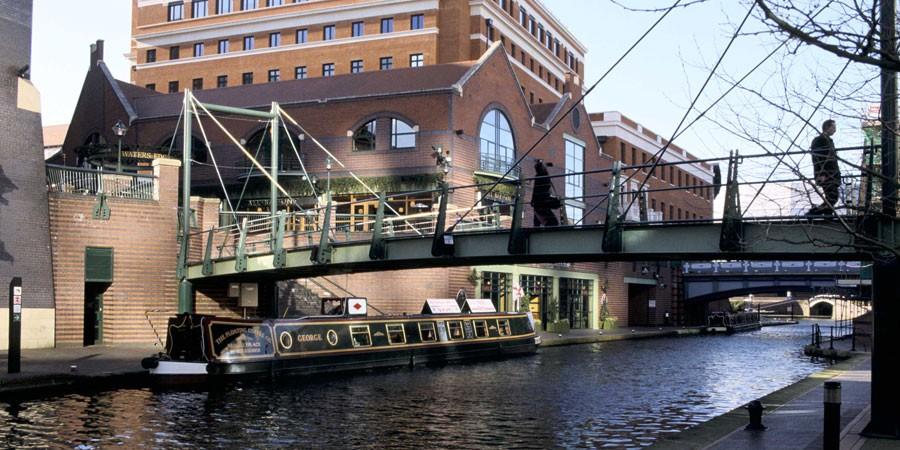 Whether or not Birmingham really does have more miles of canal than Venice, our city’s waterways continue to be well maintained and open to the public despite COVID-19 restrictions.

In the latest part of our #WestsideStillWorking series, we feature the ongoing work of the Canal & River Trust which began in 2012, taking over the guardianship of British Waterways’ canals, rivers, reservoirs and docks in England and Wales.

Canals were built at the height of the industrial revolution and were the life-blood of Victorian cities such as Birmingham.

The Birmingham Canal Navigations system, totalling 100 miles, is regarded as one of the most intricate canal networks in the world.

Its hub is the junction at Gas Street Basin, just off Broad Street in the heart of the city’s nightlife, while the Main Line Canal separates Brindley Place and the International Convention Centre.

The Canal & River Trust, which has a base in Lionel Street, says its role is to safeguard the waterways now and for the future and, in so doing, help make life better for millions of people across England and Wales.

The charity looks after and, in so doing, brings to life around 2,000 miles of waterways across the country.

In the West Midlands alone, around 1.75 million people are said to live within one kilometre of a canal.

The Trust says the network of canals runs through towns and cities across the region, bringing the countryside into urban areas and providing people with the opportunity to get outdoors and connect with nature.

Since the start of lockdown in March, the Trust has seen towpath usage increase – in some areas as much as 200 per cent – as a result of local people staying local to discover the canal on their doorstep.

Research has shown that being next to water improves mental and physical health and, with more than 500 miles to explore in the West Midlands, canals are more important than ever in providing communities access to outside space.

Adnan Saif, director of the West Midlands at the Canal & River Trust, said: “Our towpaths stayed open during lockdown and provided vital green/blue space for many local people living in the city centre who may not have access to a garden or nearby park.

“For many colleagues at the Canal & River Trust it is still very much business as usual whilst we’re in tier 3 restrictions and also whilst we were in lockdown.

“The canal is open all year round and, being 250 years old, there is always something that needs to be repaired or replace – the work never stops.

“We are taking precautions to ensure our colleagues and volunteers remain safe and that they are strictly following the guidance on social distancing, the wearing of face masks and regular hand washing.”

BID general manager Mike Olley said: “Our waterways are part of the attraction and lifeblood of this city, so it’s very reassuring that the Canal & River Trust continues to maintain the canals and rivers that give so much pleasure, particularly in these times.”