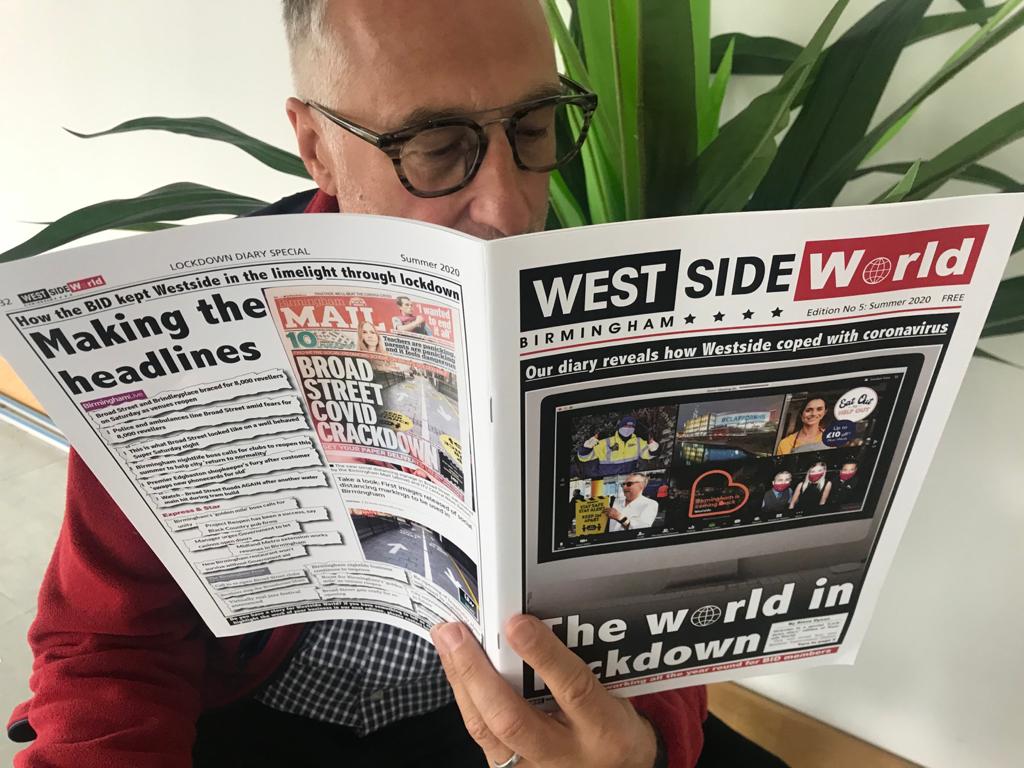 The latest Westside World newsletter is a ‘Lockdown Diary’ of everything the BID and its members have been doing since the crisis began. Mike Olley, general manager of Westside BID, reports.

I have a clear and stark memory of the morning after John Lennon was shot dead. I drove to the factory where I was a toolmaker on Summer Lane in Newtown, glued to what was then known as BRMB radio.

I didn’t drive through the A38 Queensway Tunnels under Paradise Circus, as that meant no radio reception. And Lennon’s songs were played in the factory on BRMB throughout that entire day.  It was so sad, was Tuesday 9December 1980.

A similarly stark memory was the evening of Friday 20 March 2020. I was in the Brasshouse pub on Broad Street where I had just met a journalist and was with my wife waiting to watch Prime Minister Boris Johnson on the telly.

The whole pub went silent as every patron in the Brasshouse became completely attentive, and we listened to every single word the Prime Minister had to say. I must say I was a bit of a plague denier up until that point.

But when I realised that the PM was going to open the nation’s coffers to pay people to stay at home, I became an instant convert. Up until then you generally got the idea that the national debt was only ever important when the Conservatives wanted to knock previous Labour governments. Yet here we had the Tories about to spend, spend, spend – and to do that they had to borrow, borrow, borrow.

I rang up a Tory MP pal of mine and asked what was going on. “This is serious Mick,” he told me. I now know that. There was no question of me, however, or the Westside BID team, going off work as we had a clear and immediate duty to continue to protect and promote Westside.

Several months later, as part of our endeavours, we have devoted the entire summer edition of the Westside World newsletter to become a ‘Lockdown diary’, documenting what we have done during the COVID-19 pandemic from March to the beginning of August.

That’s 32-page pages of hard work, showing how we’ve been doing our jobs and doing them really well. All accompanied with no rule book, no policies and no procedures of how to do what you have to do during a national, indeed global, crisis.

Please excuse the self-congratulations, but I think we have done admirably so far and will continue to do so. But you can read all about what we’ve been up to for yourselves. Download a digital copy of the summer 2020 edition of Westside World by clicking here:

Or if you would like a hard copy, a limited number are available by contacting the office via luisa.huggins@westsidebid.co.uk. Happy reading!