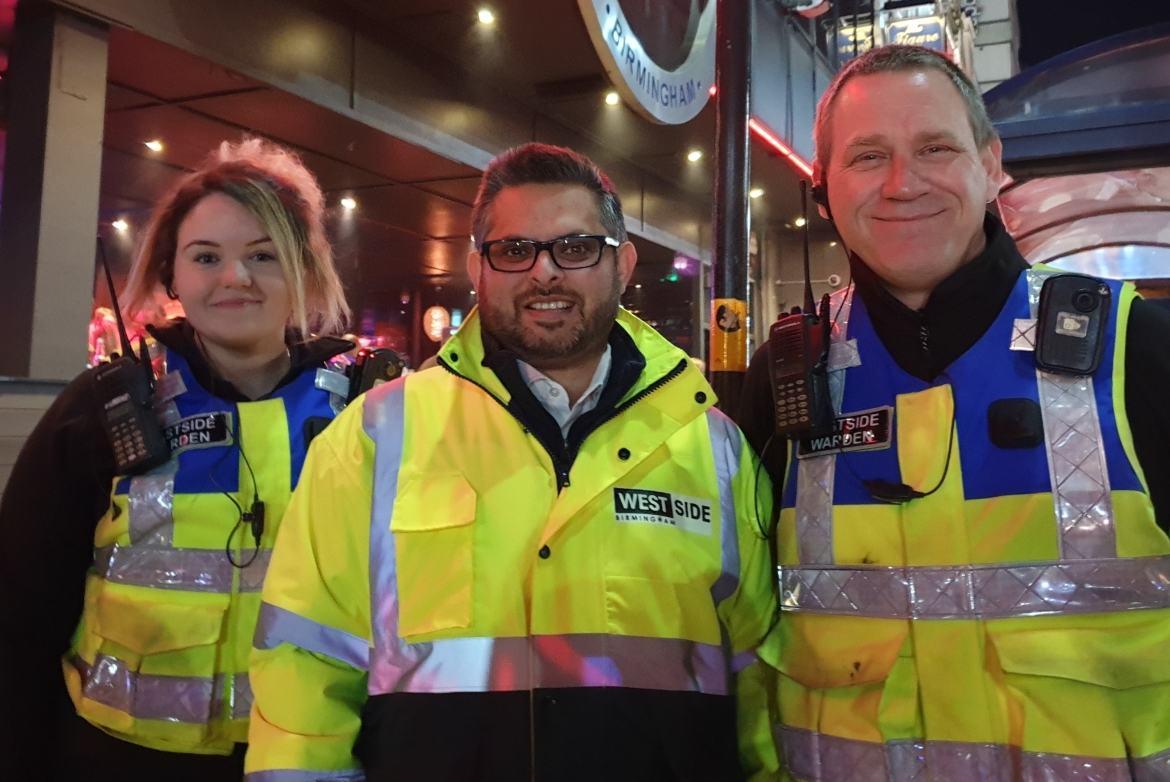 A leading Birmingham councillor witnessed the bright lights of Broad Street and the hidden, darker side of the city centre while on patrol with street wardens.

Coun Waseem Zaffar, the Cabinet Member for Transport and Environment at Birmingham City Council, joined Westside Business Improvement District’s (BID) street warden team as they kept a watchful eye over the city’s Golden Mile on a busy Saturday night (11 May).

The Westside BID wardens work closely in partnership with West Midlands Police, venue door supervisors, taxi companies and other agencies to prevent injury and criminal activity, and to reduce the fear of crime.

During his tour Coun Zaffar met many Broad Street revellers and spoke to the people who work throughout the night to keep them safe, including police officers, club door staff, ambulance crews and the area’s street pastors.

At one point, the team was put on the lookout for a missing 14-year-old child and responded to reports of a mobile phone being snatched from a partygoer walking down Broad Street.

Coun Zaffar also met one of the area’s homeless people who was spending his Saturday night begging in Centenary Square, and discussed the problems that had forced him to live on the street and the difficulties he had in finding permanent accommodation.

Senior warden Peter Willis and warden Casey Hocknall showed Coun Zaffar how the city’s agencies worked together to fight crime on the streets, keep partygoers safe and help the Westside area’s homeless and distressed people find the support they needed.

He also visited one of the city’s car parks, which had become a hangout for drug addicts, leaving piles of rubbish, drugs paraphernalia and human excrement littering the parking bays between the cars of Broad Street visitors.

Coun Zaffar said: “It’s been a real eye-opener for me. You never understand what the wardens do beyond the basics of making sure that those out having a great night on Broad Street are in a safe environment.

“But walking with Peter and Casey into some of the locations and talking to some of the vulnerable folk gets you to understand that the job is a lot, lot more than that.

“I think they are a really important asset to our city – it’s a very challenging role as they never know what’s around the next corner but they are very personable, patient and knowledgeable about the local area.”

Mike Olley, general manager of Westside BID, said he hoped that the visit would be the first of many from politicians across the Midlands.

He said: “We would like to invite them along to see for themselves how our wardens work throughout the night to protect the people of Westside.

“We’re delighted that Coun Zaffar asked to join our street wardens to witness firsthand the amazing job that they do in helping visitors to Broad Street and supporting the services that watch over them.

“He left with a real appreciation of the dedication and professionalism of our warden team and the challenges we face in keeping everyone safe, whatever their circumstances.”