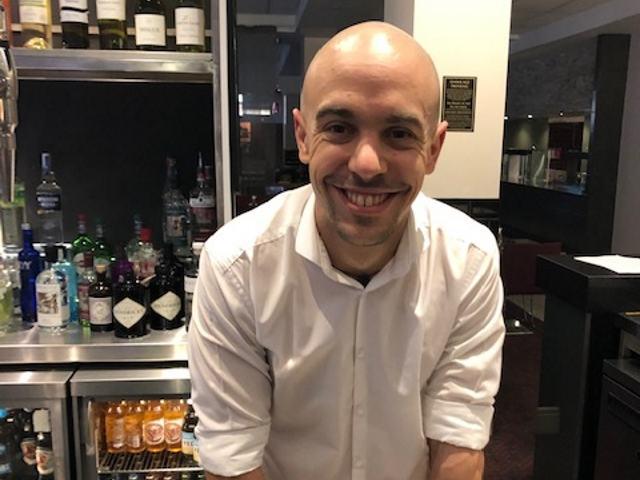 A hotel manager in Birmingham has launched a sideline career as a legal graffiti artist.

Adam Illes, the assistant food and beverage manager at Novotel’s Birmingham Centre hotel on Broad Street, initially adorned his workplace’s staff canteen and back corridor with his pop art-style illustrations.

Now the hotel has helped him to go public by asking him to decorate the walls of its customer car park.

The first spray-painting is Adam’s interpretation of famous comedian Rowan Atkinson as Mr Bean, and the second is based on philosopher Alan Watts’ thoughts about every person being one of the universe’s waves.

Adam, aged 31, was born in Hungary and moved to Ireland to live and work when he was 18, relocating to Birmingham last summer.

He said: “When I was in Ireland I started spray-painting on walls in Limerick to express myself.

“But I’ve never painted an illegal piece or left my tag anywhere I shouldn’t, and I’m very proud that every painting I’ve sprayed has been entirely legal.

“I got a number of commissions when I was in Ireland and when I moved here started to look for walls where I could paint.

“I spray-painted walls in the ironing room and staff canteen at the Ibis Hotel at Birmingham Airport, and when I started working at Novotel I decorated the staff canteen and the back corridor.

“The manager was so impressed with my work that he’s now allowed me to go public by giving me a free hand to paint the car park.”

Mike Olley, general manager of Westside BID, said: “We’ve found the start of the hidden treasures of Westside in Adam’s work, and it’s great that the public will see some of his paintings in the car park.

“Hopefully other businesses with walls that can be painted might consider commissioning Adam to brighten up their properties as well.

“Who knows? We could soon have our own version of Andy Warhol here on Broad Street!”

Adam added: “I love spray painting and would one day love to make a living out of my work.

“I enjoy spending a whole day being in my own world when I’m spray painting, and the more you do things and put your heart into it, the more your techniques grow and develop.

“I’m grateful for this opportunity and would welcome any other commissions to help make the Westside area brighter.”

Anyone interested in Adam’s work can see more of his painting on his own pop art graffiti website at www.adamilles.com.